Independent Living Institute (ILI) » Library » Interview with Arthur Klimchenko, 22 years, Kaliningrad - "Personal assistance would certainly be good, but I would be afraid of being dominated"

Interview with Arthur Klimchenko, 22 years, Kaliningrad - "Personal assistance would certainly be good, but I would be afraid of being dominated"

Westberg, Kenneth.  2010.  Interview with Arthur Klimchenko, 22 years, Kaliningrad - "Personal assistance would certainly be good, but I would be afraid of being dominated".

Arthur Klimchenko lives with his parents in the Russian city of Kaliningrad, he would like to leave home, but says that it is not possible because of his finances and his disability.
When personal assistance is described for him, he sees the benefits, but he is also afraid that the assistants would decide over him, because of how persons with disabilities are viewed in Russia. He is also afraid that many disabled would stop doing what they are capable of doing and just exist, eating and sleeping.

Lives with his family in an old German neighborhood 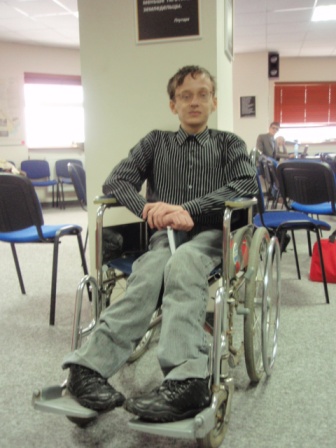 Arthur Klimchenko is 22 years old and lives with his parents, a younger brother and a cat in an apartment in an old German neighborhood. The house is a three-story brick building, built more than 100 years ago. The family has lived there since the forties, when the city after the war became a part of Russia. Arthur Klimchenko says that there were originally three apartments in the stairwell, but that each apartment since long time has been split in two.
"Of course, there is no ramp, elevator or anything like that. I have my own little room, we also have a kitchen, a bathroom and a larger space. "
Arthur Klimchenko says that the apartment is not accessible, the doors are too narrow, so he can not use the wheelchair at home, which is not useful, he says.
"It wears out my body but I've still been able to buy another wheelchair than the one I got from the authorities. The first was almost impossible to drive by yourself. "
Are there stairs when you want to get out of the house?
"Yes, but we Russians say 'Let's go another way" Because we live on the first floor, we have been able to build a ramp so I can put myself in a wheelchair, open the doors and roll straight down the street."

Gets help from family

Arthur Klimchenko got his disability after an unsuccessful surgery, which left him unable to walk. Today, he gets help mostly from his mother, who retired two years ago but still works a little extra. He would like to move into his own apartment.
"There should be time for me to move away from home, but as you can understand I can not do it now. "
What would you need to live by yourself?
"Above all I would need money to pay rent and everything needed to live. But if you mean help to live independently, I would certainly need some support for that also, although I can do a lot by myself and I would prefer to do most things myself. Another problem is all the stairs that are in most houses, even if you live on the first floor. "
What practical help can you get from society?
"Nothing."
A normal monthly salary in Kaliningrad is 20 000 rubles (500 Euro). In Russia, a person can get 1400 rubles (35 euros) per month in additional pension to pay people who help in daily life, Arthur Klimchenko had not heard of it until recently.
"I do not think many people know about it. "
Is it difficult to get support using that money?
"It would be more honest to say someone is working for free, and not for so little money."

The whole society would have to change

Arthur Klimchenko thinks that the whole society needs to change for him to live an independent life. Today, there are no ramps, elevators, available jobs and schools and good roads and streets to get on with a wheelchair.
"If things were more suited to people with disabilities they would be able to earn money themselves. I can not understand why this is not done, it should be obvious. "
Arthur Klimchenko says that the transport system is very old, public transport like buses and trains are not accessible. When he is out in the city he gets help from his mother or his little brother.
"I have heard that the city bought a bus last year that would be accessible to people in wheelchairs but no one has seen it yet."

Fears that assistants would decide over people with disabilities

I describe personal assistance in Sweden to Arthur Klimchenko, how it is possible to get a certain number of hours per day approved for assistance with eating, dressing and washing, as well as for working, being a parent, spending time with friends and so on.
“I think it would be great, you’d be able to do a lot with a service like that. But with us, I see problems, I’d be afraid of being dominated by the assistants. We aren’t worth much in people's eyes here.”
He also sees problems based on how people with disabilities view themselves; many are not accustomed to telling others what they want.
“Many would probably stop doing what they are able to do and just exist, eating and sleeping, and I'm really afraid of getting into a situation like that.”
According to Arthur Klimchenko, people with disabilities have no function in society today, they are completely dependent. He believes that for real change to happen, more money has to be allocated, both to adapt society and to enable people with disabilities to live independently.
“Today's society gives some discounts and helps you a bit, but most people don’t care about what you need.”

Arthur Klimchenko has an education in journalism and philology, and his specialty is English. He works approximately 20 hours per month as an English teacher in a distance course that he manages through the Internet. He and his students communicate with Skype and ICQ, they have a special program and a homepage they connect to.
"My students live mostly in Kaliningrad region, they are pupils who can not attend a regular school. In one of my courses, I have three 40-minute lessons per week. "
Arthur Klimchenko studied ten years in elementary school, he started a special gymnasieklass for especially gifted pupils, but it was discontinued because of lack of money, after he went into an ordinary class.
"After high school I started university and studied to the equivalent of a bachelor's degree, a total of four years. "
How did you manage to go to school?
"Periodically, I had home schooling, but mostly I got to and from school either with help from my parents or by an assistant paid by my parents. We paid for example, a janitor from the school that helped me get to class. "
However, it is not common that people with disabilities are educated at this level.
"When I was in college I never saw anyone else who was sitting in a wheelchair, says Arthur Klimchenko."

Arthur Klimchenko was interviewed by Kenneth Westberg on Feb. 28, 2010

Sergey Kiselev, Chairman of Apparel - “The view of people with disabilities is very negative in Russia”