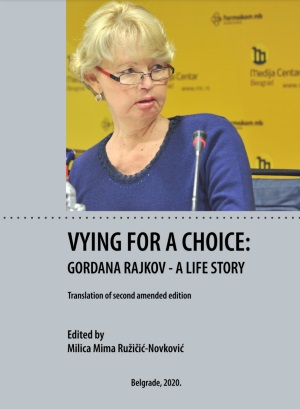 Independent Living has spread from the USA to many countries across the world. Started in the 60s by American activists the ideology, philosophy and movement of Independent Living has been important for changes making the world a better place for disabled people[1]. In the book – Vying for a Choice: Gordana Rajkov – A Life Story Milica Mima Ruzicic-Novkovic has portrayed the life of Gordana Rajkov, who has been the key for Independent Living in Serbia. The second amended edition published by the Center for Independent Living Serbia in 2020 is based on the recording and method of oral history, where Milica Mima recorded Gordana and then together analyzed the recordings over a fourteen-month collaboration. The book was to mark the half a century commitment Gordana has carried out working for disability issues through the muscular dystrophy associations that she had founded as well as the Independent Living Center in Serbia.

Gordana’s family background with her mother surviving the World War II detention camps and her grandfather being killed, and with the overwhelming poor living conditions being a family of artisans is painted. Life was one of hardships and then as well Gordana developed muscular dystrophy adding to the family’s everyday hardships being a time when attitudes towards disabled people were more negative, technical equipment expensive and social services unheard of in Serbia and in most countries. Gordana’s life hurdles increased as her pillar being her family fell from under as her parents died early and her brother enlisted in the navy leaving Gordana to fend for herself as a young adult.

Gordana realized early how important it is to be politically active as the decisions, policy and legislations passed by politicians affect one’s life with or without one’s voice having been heard. She tried then to make her mark which she did developing from an activist and founder of disability associations into a Member of the Serbian Parliament. Gordana realized she could have impact on the movement by becoming a role model and having hear voice heard by many. This way she could influence change. And change was made with Gordana seeing several legislations adopted petitioned by herself and including for example personal assistance in the Social Protection Act adopted by Serbia in 2011. This was the first inclusion of personal assistance, an Independent Living service, in Serbian legislation.

Gordana was not only active in disability issues but was early to incorporate a gender dimension in her work. Making alliances with the women’s movement was a strengthening factor for the development of the network that Gordana was building. She lobbied against the double discrimination of disabled woman and for anti-discrimination legislation.

Vying for a Choice occupies an important seat amongst other literature depicting Independent Living and the lives of its leaders such as the recent book by Judith Heumann; Being Heumann: An Unrepentant Memoir of a Disability Rights Activist published in February 2020 and the book The World Became My Room, written by Kalle Könkkölä and Heini Saraste in 1996 on the life of Kalle, the Finnish guru for Independent Living[2]. This book gives an account of the history of our movement in Serbia and adds to the international political account. It serves as a manual for inspiration and motivation to we other activists forming our commitment. Gordana’s past took her from Serbia to among other places Ireland where she came in contact with Martin Naughton and for the first time with the Independent Living movement. She could then put a name to her views and conviction realizing that she had been carrying out her endeavors in the Serbian disability movement with an Independent Living spirit without knowing it. The meeting with Martin led to a longer sojourn in Ireland and the opportunity to further develop international contacts and to learn more about activism in general and to become a full-fledged Independent Living activist. Life-time friends were made, and essential contacts acquired that were beneficial for further activity in Serbia and the funding for initial projects on personal assistance.

A few words of praise are not worthy enough for Gordana whose life commitment has contributed to great change for disabled people in Serbia, the Balkans and in other countries. Gordana has been one of the key figures in the Serbian and European Independent Living movement, key in spreading the Independent Living ideology, in showing what can be done for change, what legislation is needed and how obstacles can be overcome in our fight for better lives of the disabled. Gordana took a place in the ENIL Hall of Fame[3] beside other great activists such as Adolf Ratzka living in Sweden, Bente Skansgård from Norway, Kapka Panayotova from Bulgaria and John Evans from the UK. The book Vying for a Change gives inspiration and motivation and an important historical perspective of Independent Living and its role for change – bettering the lives of disabled people.

[1] Disabled people is the term adopted by the European Network on Independent Living to portray the society as responsible for the inaccessibility leading to exclusion of people with impairments from participating actively with parity in our societies. The UN CRPD uses the term people with disabilities.