On 24 and 25 November 2016, the Law as a Tool for Social Change project arranged a conference and two seminars on how civil society, through strategic litigation, can counteract discrimination against people with disabilities and contribute to case law and the changing of legal norms.

Paul Lappalainen was the moderator for the conference and seminars. (He was also the project manager at the time). ”There is a myth in Sweden that laws on their own change social norms.” he said. ”Laws are important, but only a first step. The second step, implementation of the law, particularly in terms of case law, is necessary for real changes in norms.”

Paul Lappalainen emphasized the need for civil society to become more effective concerning the writing of new laws as well as the need to play an active role in the enforcement process:

Below are a selection of videos from the two days. The videos are in English. Subtitles are available in both English and Swedish by clicking on the subtitle symbol. 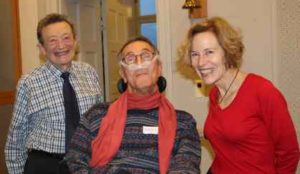 The initiator of the Law as a Tool project, Adolf Ratzka, who is also the president of the non-profit association with the same name, began with the words: ”Sweden is a welfare state, but we are still second-class citizens. There is discrimination. That is what we want to change.”

Video with Adolf Ratzka’s introduction to the ideas behind the Law as a Tool project.

In the interview, Wolinsky talks about how Disability Rights Advocates functions and, for example, the cooperation with pro bono lawyers from private law firms. Wolinsky emphasizes that rights of people with disabilities are an issue of civil rights. He also pointed out that positive results in disability cases also leads to changes that benefit persons without disabilities.

Sid Wolinsky on social change through the use of litigation 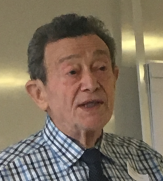 Sid Wolinsky As a keynote speaker, Sid Wolinsky emphasizes the importance of finding cases that can give a major impact on the lives of persons with disabilities as well as the importance of having courage in bringing those cases. Courage is important in that there is often little case law and you are challenging strong established interests. He points out that in the United States this is one reason why you cannot rely solely on government anti-discrimination authorities for enforcement. 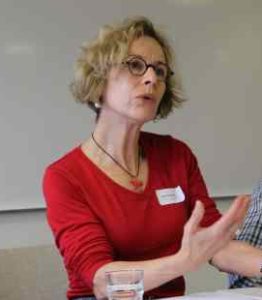 Pat Kirkpatrick was the second main speaker. She was also a founder of Disability Rights Advocates. For 30 years she has been engaged in fundraising within nonprofit organizations.

Kirkpatrick is today a Fundraising Consultant at Disability Rights Advocates and also has responsibility for volunteer recruitment. The agency started basically from zero in terms of resources, but after many years, it has become stronger and independent through strategic and innovative work with fundraising. Fundraising is an area in which Swedish organizations seem to have a lot to learn.

Susanne Berg, Annika Jyrwall Åkerberg and Andrea Bondesson about what we can learn in Sweden 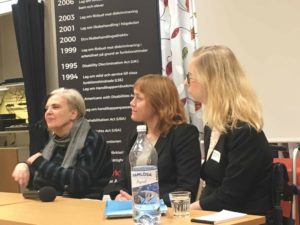 The following panel, Annika Jyrwall Åkerberg, lawyer at Civil Rights Defenders, Susanne Berg, director of politics and methodology at STIL (Founders of Independent Living in Sweden) and Andrea Bondesson, lawyer in the Swedish Disability Federation’s Project From Talk to Action, brought up their perspectives. Among other comments, Susanne Berg emphasized that Swedish law in practice pushes the parties towards conciliation, leading to an insufficient development of case law. ”Now is the time make sure that the cases get to court,” she said.

Film in which the panel comments on Sid Wolinsky’s and Pat Kirkpatrick’s presentations. 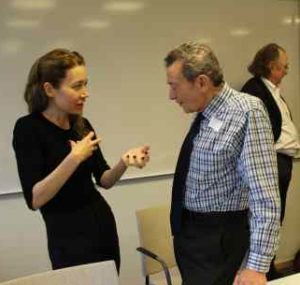 The first seminar on 25 November 2016 examined the role of lawyers and lawyering in the enforcement of discrimination law concerning persons with disabilities.

Gerard Quinn on e.g. how law clinics and summer schools can contribute to the development of lawyers in this field

Gerard Quinn participated in the seminars through a pre-recorded video. He is a professor of law and director of the Center for International Disability Law and Policy at National University in Galway, Ireland. They have masters and doctoral Courses as well as a summer school focusing on disability and equality as human rights issues.

Quinn is seen as one of the ”architects” behind the Convention on the Rights of Persons with Disabilities (CRPD). He is also on the scientific committee of and the EU’s Fundamental Rights Agency (FRA, Vienna). Gerard Quinn talks about how EU law and CRPD can be used at the national level. Legal cases and political processes are as important as the rights themselves. The process of change makes them real and tangible to the public.

Quinn points out that European lawyers are getting better at using arguments based on international human rights law, but there is room for improvement. Establishing law clinics that engage law students in bringing cases to court is one way to push the legal processes forward which in turn can lead to increased knowledge and interest among lawyers and the rest of the legal community. Setting up summer schools based on a cooperation between law schools and law societies (bar associations) is another way of contributing to increased awareness and implementation.

Gerard Quinn’s video created for the conference and seminars.

The Chair of the Swedish Section of the International Commission of Jurists (ICJ-Sweden) and Stellan Gärde, Chair of Applied Human Rights, reflected on the role of lawyers in implementing the protection against discrimination.

”The legal tradition in Sweden is not to go to court, not to litigate, but to investigate,” according to the Chair-person. They discussed the need for a greater and more creative role for lawyers, touching on topics ranging from pro bono work, to improved training regarding human rights, to the need to focus on discrimination law/equality as a key human right and constitutional issue in the cases that are taken to court.

Film in which The Chair of the Swedish Section of the International Commission of Jurists and Stellan Gärde reflect on the jurors’ role in implementing the anti-discrimination.

The second seminar was held at Ersta Sköndal University College and focused on the role of civil society in the enforcemnt of equality law in regard to disability and the strengthening of human rights. Lars Trädgårdh, Professor of History and Civil Society Studies at Ersta Sköndal, has a particular focus on the power or lack of power in civil society.

Gerard Quinn’s video emphasised the importance of civil society engagement in the development of anti-discrimination law as well as the enforcement of those laws. It is the active civil society involvement which will lead to laws and public policies that actually have a greater impact on behalf of persons with disabilities.

Among other things he said that the involvement of civil society upholds the visibility of the issues and the need for change. Sid Wolinsky emphasized the support by and engagement of the disability movement is in general a key component in the litigation of high impact cases. He works closely with US disability organizations. Without support in the disability movement, there is a risk that good cases will not reach their potential impact.

Lars Trägårdh and Adolf Ratzka, wrapping up the seminar, discussed civil society engagement and its potential with Pat Kirkpatrick and Sid Wolinsky, as well as the audience. Among other things, Lars Trägårdh pointed out that we are not very comfortable with the ”return of charity” in Sweden, but that the structural shift taking place means greater opportunities for civil society to assert itself.

Video in which Lars Trägårdh and Adolf Ratzka talk with Pat Kirkpatrick and Sid Wolinsky as well as the audience about civil society and the law.