I'm almost 74 years old and have been ILI's director since the organization's start in 1993. Contrary to what you might suspect, my role models have not been Robert Mugabe, Fidel Castro or similar hard-to-remove older gentlemen. For a long time, I have been looking for somebody willing and capable to succeed me as ILI's  director, a position where you are expected to raise money for your own salary. Now, finally, I found the right one: Jamie Bolling. 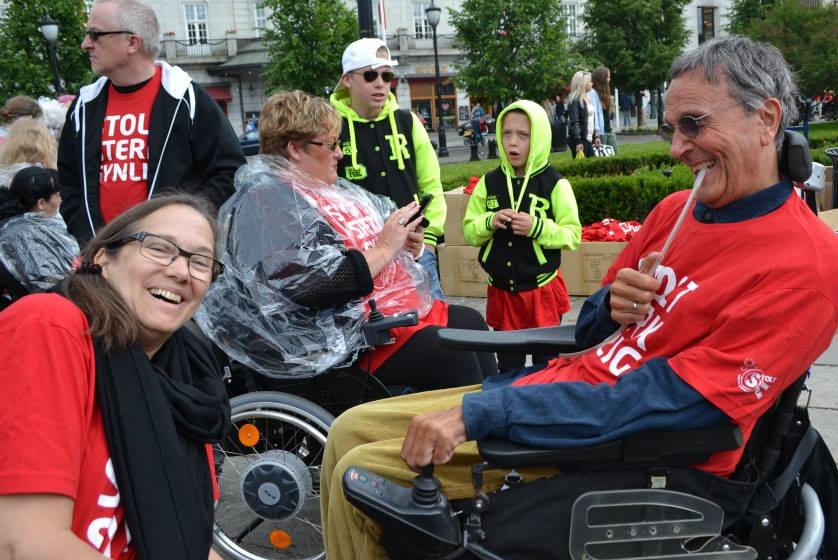 In the unlikely case, you should not know all about Jamie, she has worked with international disability issues for many years, most recently as Executive Director of ENIL (European Network on Independent Living), at SHIA (now MyRight) and the national association DHR. She has been chair of the personal assistance user cooperative STIL, has a degree in Disability Studies, had a high position in the Swedish Green Party, and has an enormous personal network in Sweden and abroad. As a woman she represents a welcome change from decades of male dominance at ILI. Jamie is not only a miracle worker and an experienced leader. She is a very social, open and kind colleague and human being. I'm proud of having such a successor!

Over the years, ILI has grown from a one-man show to a respectable NGO with a staff of almost twenty (mainly part-timers). Since STIL and GIL (STIL's equivalent in Gothenburg) founded ILI in 1993, we have run dozens of interesting, successful and often acclaimed projects - financed almost entirely by external grants. Not many other civil society organizations can claim such a record. I'm proud of handing over a fine outfit with a highly competent and motivated staff from a dozen countries, a warm and supportive work environment with laughter and socializing outside work.

To leave all that from one day to another would be too hard. ILI has been a central and enriching part of my life, something I don't want to give up completely. I'll stay on ILI's board, assist in writing project proposals, attend meetings and give my five cents' worth of advice - when asked. It's a privilege to continue my commitment - at my own pace.

Thank all of you I got to know and work with during my years with ILI!

A challenge and honor

It is an honor and a challenge to follow Adolf as the executive for ILI. I met Adolf shortly after my accident, which was here in Sweden. Adolf immediately became a role model and taught me about Independent Living. This was in 1993 when ILI was being formed. Adolf then asked me if I would consider becoming a member of STIL's board. I was unaware of what it meant but said yes and my career in the Swedish civil society began.

Since 1993 I have followed Adolf's work and have seen how he has been able to realize his dreams and gain respect from many around the world. Ideas have been many and projects alike within Adolf's promotion of Independent Living.

Today, as a the new director for ILI, I have gained the responsibility to manage some of Adolf's projects. It feels meaningful and exciting. With my experience and contacts, I hope to continue the development Adolf has achieved for ILI. ILI is known in Sweden, but even more in the world, which makes the work a challenge that is interesting and exciting. I believe in the continued development of ILI in Sweden as well as in the Nordic region and the world, but only with good cooperation with many from the Independent Living movement and its supporters. I look forward to work with many of you!