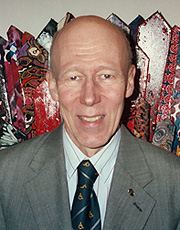 Since 2001 Tomas Lagerwall has been the Secretary General of Rehabilitation International (RI), a federation of national and international organizations and agencies. RI develops and promotes initiatives to protect the rights of people with disabilities, improve rehabilitation and other crucial services for disabled people and their families and increase international collaboration towards these objectives.

RI is currently composed of about 1,000 member organizations in 95 nations, in all of the world's regions. Rehabilitation International maintains official relations with the United Nations Economic and Social Council, the World Health Organization (WHO), the International Labor Office (ILO), UNESCO, UNICEF, the Organization of American States, the European Union and the Council of Europe, the UN Economic & Social Commission for Asia & the Pacific (UNESCAP), and others.

Mr. Lagerwall was previously the Planning Director at the Swedish Handicap Institute, a national institute, with a staff of 90 people, aiming at improving the quality of life for people with disabilities by ensuring access to high quality and well-functioning assistive technology and by increasing access in society. As the Planning Director, he was responsible for short and long-term planning and follow-up, evaluation and quality assurance of the Institute’s on-going activities. In addition Mr. Lagerwall was the coordinator for the Institutes international relations.

While working at the Swedish Handicap Institute, Mr. Lagerwall went on several missions to countries such as India, Kenya, Zimbabwe, Sri Lanka, Vietnam and Burkina Faso as a consultant or organizer of seminars on issues such as Community-Based Rehabilitation (CBR), appropriate technology and access.

Tomas Lagerwall was also involved in European Union projects in the field of assistive technology and was the convener of a European standardization project on Design for All.

In addition Mr. Lagerwall worked at SIDA – the Swedish International Development Authority – the Swedish government’s international development cooperation agency at its headquarters in Stockholm and at field offices at Swedish Embassies in Guinea-Bissau and Nicaragua.

Mr. Lagerwall holds a university degree in social work and public administration. In addition he studied international rehabilitation, international health, public health and evaluation of health services and social management. In June 2005 he was given an Honorary Degree of Doctor at Kobe Gakuin University, Japan.

He has lived and worked in Sweden, Colombia, Guinea-Bissau, Nicaragua and USA. In addition to his mother tongue Swedish, he speaks English, Spanish, Portuguese and French.