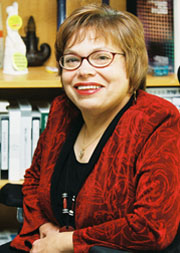 Judith Heumann is an internationally recognized leader in the disability community and a lifelong civil rights advocate for disadvantaged people. She currently is the Director for the Department on Disability Services for the District of Columbia. She is responsible for the Mental Retardation and Developmental Disability Administration and the Rehabilitation Services Administration.

From June 2002- 2006, Judith E. Heumann served as the World Bank's first Adviser on Disability and Development. In this position, Heumann, an internationally recognized expert on disability and diversity issues, led the World Bank's disability work improving policies, programs, and projects that allow disabled people around the world to live and work in the economic and social mainstream of their communities. She is currently the Lead Consultant to the Global Partnership for Disability and Development.

From 1993 to 2001, Heumann served in the Clinton Administration as the Assistant Secretary for the Office of Special Education and Rehabilitative Services in the Department of Education. Heumann was responsible for the implementation of legislation at the national level for programs in special education, disability research, vocational rehabilitation and independent living, serving more than 8 million youth and adults with disabilities.

For more than 30 years, Heumann has been involved on the international front working with disabled peoples’ organisations (DPOs)  and governments around the world to advance the human rights of disabled people. She represented Education Secretary, Richard Riley, at the 1995 International Congress on Disability in Mexico City. She was a US delegate to the Fourth United Nations World Conference on Women in Beijing, China. And she has been active with Disabled People International, Rehabilitation International and numerous Independent Living Centers throughout the world. She co-founded the Center for Independent Living in Berkeley California and the World Institute on Disability in Oakland California.